(Black Box) consists of 15 new artist’s books by Jan Freuchen, designed by Andreas Töpfer. Presented in a signed and numbered cardboard box, the booklets contains various series of paintings, collages, drawings and photos produced by the artist between 2011-18. The publication also contains a new essay by the writer Orit Gat.

Andreas Töpfer is an award winning freelance graphic designer, illustrator and drawing artist. He works for the Berlin publisher KOOKBOOKS, which he founded in 2003 together with poet and editor Daniela Seel. He is also visual editor, designer and illustrator for the Norwegian literature and culture magazine VAGANT. His latest book is Speculative Drawing (Sternberg Press, 2016), made in collaboration with A. Avanessian.

Orit Gat is a writer based in New York whose work on contemporary art and digital culture has been published in a variety of magazines, including frieze, the Times Literary Supplement and The White Review. She is a winner of the Creative Capital/Warhol Foundation Arts Writers Grant. 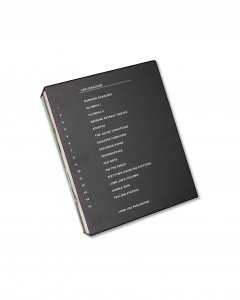