Poetry. Literary Nonfiction. "My desire is to erase boundaries,' says Wellman, and in many ways, this book is an exploration of how language can aid that project. Based in consideration of translation, Wellman's musings pass through the lens of critical theory and continental philosophy, a lens that gathers diverse approaches and focuses them into a single, illuminating beam. At once erudite and intimate, autobiographical and analytical, Wellman effectively erases the distinction between text and translation, between writer and translator-and with a particularly graceful momentum that comes through in both his prose and his poetry." —Cole Swensen

Donald Wellman's new book of prose travels far : Antonio Gamoneda's poetry, "Earth Ergon" on the work of Derrida, his thoughts on translating Paul Celan, his musings on the art of translation, the work of French Poet Anne-Marie Albiach. This volume includes a new version of her poem : "après cela, moi j'ai regardé" translated by Wellman and Julian Kabza. Also included, a new work by Jean Daive, the author of Under the Dome (Burning Deck Press). Daive's reminiscence titled -"Urgence et négation en réponse Anne-Marie Albiach et Paul Celan" is, in part, an extension of his earlier work on Celan. 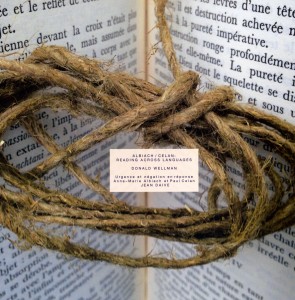 Jean Daive
A Lesson in Music

Jean Daive
Under The Dome: Walks With Paul Celan