Object Lessons is a series of short, beautifully designed books about the hidden lives of ordinary things.

We all wear hoods: the Grim Reaper, Red Riding Hood, torturers, executioners and the executed, athletes, laborers, anarchists, rappers, babies in onesies, and anyone who's ever grabbed a hoodie on a chilly day. Alison Kinney's Hood explores the material and symbolic vibrancy of this everyday garment and political semaphore, which often protects the powerful at the expense of the powerless-with deadly results. Kinney considers medieval clerics and the Klan, anti-hoodie campaigns and the Hooded Man of Abu Ghraib, the Inquisition and the murder of Trayvon Martin, uncovering both the hooded perpetrators of violence and the hooded victims in their sights.

Object Lessons is published in partnership with an essay series in The Atlantic.

“Provocative and highly informative, Alison Kinney's Hood considers this seemingly neutral garment accessory and reveals it to be vexed by a long history of violence, from the Grim Reaper to the KKK and beyond-a history we would do well to address, and redress. Readers will never see hoods the same way again.” –  Sister Helen Prejean, author of Dead Man Walking

“From executioners in modern-day Florida, to the Ku Klux Klan, to 'hug a hoodie' Cameron – this scholarly study explores a complicated cultural history ... [Kinney's] argument about the connection between hoods and power is a strong one ... The book is at its best on the connections between hoods and marginalised communities.” –  The Guardian

“Alison Kinney's Hood is short but ambitious, considering not just the hoodie as a marker of social exclusion both willed and unwilled, the preferred mufti of rappers and death-metallists, but also the wider cultural implications of covering or cowling the head ... This provocative [book] ... raises more questions than it seeks to answer - but that's fitting when the issues it discusses are still so urgent and so open.” –  Times Literary Supplement

“In spry and intelligent prose, Alison Kinney tours the many uses of the hood in human culture, exploring seemingly unconnected byways and guiding the reader through some surprising connections. The ubiquitous hood, she shows, is an artifact of human relationships with power, the state, and one another. By the end of my time with Hood, I had laughed out loud, sighed in exasperation, and felt by turns both furious and proud.” –  Rebecca Onion, history writer for Slate Magazine

“Kinney's book Hood, part of Bloomsbury's Object Lessons series, explores how one piece of clothing has the power to threaten, terrify, comfort, as well as cover pizza bloat. A writer whose work has appeared at Harper's Magazine, The Paris Review Daily, The Atlantic, Lapham's Quarterly, and The New York Times, her first book is about ambiguity of the hood through time, and how 'this ambiguity tends to serve the powerful, at the expense of the powerless, regardless of who's wearing the hoods.'” –  Bookslut

“This slim, energetic book ricochets between medieval executioners, Abu Ghraib, anarchist protestors, the Ku Klux Klan, Trayvon Martin, and the Grim Reaper in search of a Unified Theory of Hoods. Surprisingly, it ends up finding one, and unearths all manner of fascinating hood-related facts along the way.” –  Pacific Standard

“Hoods infiltrate mass media, political discourse, supermarkets, school uniforms, New York Fashion Week, our homes-but it is easy to overlook them, or dismiss their ubiquity as apolitical and inconsequential, as a result. Alison Kinney's Hood is centrally constituted around reaffirming this inherent ordinariness, while magnifying the extraordinary contexts hoods so often become wrapped up in. Hood is published as an installment of the ongoing Object Lessons series, which prompts writers and readers alike to focus on the smaller objects that constitute a life, engage in imaginative intellectual play with them, subject them to inscrutable human curiosity, and utilize them as mirrors that reflect back upon a very human world.” –  Lauren Stroh, Public Books

“[Hood] is part of a series entitled Object Lessons, which looks at 'the hidden lives of ordinary things' and which are all utterly 'Fridge Brilliant' (defined by TV Tropes as an experience of sudden revelation, like the light coming on when you open a refrigerator door). ... [I]n many ways Hood isn't about hoods at all. It's about what – and who – is under the hood. It's about the hooding, the hooders and the hoodees ... [and] identity, power and politics. ... Kinney's book certainly reveals the complex history of the hood in America.” –  London Review of Books

“Alison Kinney's Hood ... deftly maps the historical facts behind hooding (and, oh my, there are so many hoods!) and also untangles our past to demonstrate how people in positions of power frequently subvert ideas of right and wrong, normal and suspicious, law-abiding and criminal in order to maintain and even strengthen their power. ... The Object Lesson series, published by Bloomsbury Press, covers a wide range of topics: driver's license, drone, phone booth, hotel, cigarette lighter, bread, eye chart, etc. And like all of them, Kinney's book takes us on a long historical journey-religious hoods, famous hooded characters, costume and fashion hoods, hoods that look cool, hoods that keep us warm, brand-name hoods, hijabs, burkinis, Masonic hoods, KKK hoods. ... Hood, ultimately, is the map that shows us how we arrived at our racial troubles today; it's a historical lesson that calls us to action. By reading it, we participate in the movement against racial hatred.” –  Leslie Jill Patterson, Texas Tech University, USA, Ploughshares

“Part of the publisher Bloomsbury's 'Object Lessons' series, Hood contains a definite chill as Kinney tracks the history and significance of the garment through the 15th century to the present. ... Kinney tells a riveting story of the origins of the Ku Klux Klan's hooded uniforms. ... This examination is part of the strength of the Object Lessons series. (Other titles look at Silence, Glass, and Dust.) Kinney, a writer in Brooklyn, New York, knits seemingly disparate subjects - burkinis and gentrification, for example - together in such a way that the connection is instantly appreciated – and she does her work in fewer than 200 pages. It's thought-provoking without the lecture. In examining these small yet significant objects of daily life, we find new meaning in the world around us. Next time you get a little chilly and reach for your hoodie, thank Kinney for this history lesson.” –  Tara Jefferson, The Anisfield-Wolf Book Awards Book Review

“Hood is searing. It describes the historical properties of the hood, but focuses on this object's modern-day connotations. Notably, it dissects the racial fear evoked by young black men in hoodies, as shown by the senseless killings of unarmed black males. It also touches on U.S. service members' use of hoods to mock and torture prisoners at Abu Ghraib. Verdict: Buy. Hoods can represent the (sometimes toxic) power of secret affiliations, from monks to Ku Klux Klan members. And clearly they can also be used by those in power to dehumanize others. In short, Hood does an excellent job of unspooling the many faces of hoods.” –  Book Riot 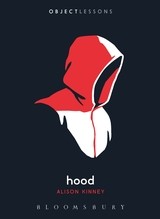