Object Lessons is a series of short, beautifully designed books about the hidden lives of ordinary things.

What is silence? In a series of short meditations, novelist and playwright John Biguenet considers silence as a servant of power, as a lie, as a punishment, as the voice of God, as a terrorist's final weapon, as a luxury good, as the reason for torture-in short, as an object we both do and do not recognize. Concluding with the prospects for its future in a world burgeoning with noise, Biguenet asks whether we should desire or fear silence-or if it is even ours to choose.

Object Lessons is published in partnership with an essay series in The Atlantic.

“When I realized I was making notes on memorable passages in Silence several times a page, I knew I'd found the book I've been needing to read. John Biguenet's extended meditation on silence is provocative, witty, moving, and truly golden.” –  Valerie Martin, Orange Prize-winning novelist and author, most recently, of The Ghost of the Mary Celeste

“One virtue of silence is that it enables us to contemplate a work like John Biguenet's ever-fascinating new book. One virtue of his book-one of many-is that it does not go overboard in treating silence as a virtue.” –  Garret Keizer, author of The Unwanted Sound of Everything We Want

“Taking us from the ancient world to Houston's Rothko Chapel to outer space, John Biguenet gives us a surprisingly boisterous tour of silence, stillness, and calm. Biguenet takes a space that looks at first glance like it is empty, as if it were, actually, defined by its emptiness, and he fills it with his erudition, his wisdom, his warmth, and his wit. We are lucky to spend this time rapt at his feet, to take all of this in.” –  Jessa Crispin, editor-in-chief Booklust and author of The Dead Ladies Project

“What makes [Silence] stand out is the way this silence retreats, fails to materialize as such. The book unfolds as a failed or botched detective story: the search for silence, for a state that defies the human. Written in the form of a memoir or notes to and from one self to others… [Silence] ends as [Biguenet] leafs through a National Geographic, reads an article on noise pollution at sea and its catastrophic effects on the social life of whales. 'What is the future of silence,' he asks? 'More lonely whales,' he fears. It's enough to make you never want to speak again.” –  Julian Yates, Los Angeles Review of Books

“Biguenet examines how we define silence, how we seek silence, how we sell silence, and how silence relates to things such as reading, the stage, secrets, and even dolls. He talks about how true silence is virtually unachievable in the modern world and how people become disoriented in pure silence. ... At the end of Silence, Biguenet contemplates the future. As he writes amidst noise and commotion, the "hum" of the modern world as he describes it, he read a National Geographic article about whales and how passing ships disrupt their ability to communicate with one another. Their 'silence' is broken. Thus, we are left to consider how silence or lack thereof impacts not only us but the entire ecosystem around us. It's a poignant reminder that in the modern world, with its hectic pace and ever present noise, sometimes what we most need is the one thing we can't seem to get.” –  Frank Valish, Under the Radar

“Object Lessons' describes themselves as 'short, beautiful books,' and to that, I'll say, amen. … [I]t is in this simplicity that we find insight and even beauty. … Silence by John Biguenet … explores whether it's possible - or indeed if we would want - to experience true 'silence.' … If you read enough 'Object Lessons' books, you'll fill your head with plenty of trivia to amaze and annoy your friends and loved ones - caution recommended on pontificating on the objects surrounding you. More importantly, though, in the tradition of McPhee's Oranges, they inspire us to take a second look at parts of the everyday that we've taken for granted. These are not so much lessons about the objects themselves, but opportunities for self-reflection and storytelling. They remind us that we are surrounded by a wondrous world, as long as we care to look.” –  Chicago Tribune

“Biguenet goes on to deal with our responses to tragedy, terror and crime, the relationship of children with toys and pets, Freud's views on the uncanny, gender roles in asking of questions and giving of advice … and many other facets as he shows how silence is an integral part of our lives, even in ways we could have never imagined.” –  Business Standard, India 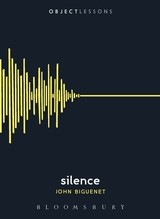