A Series of Un/Natural/Disasters is attentive to the sorts of mutual aid and possibility that appear in moments of state failure. As such it maps long and complicated equations, moving from Katrina to the prisoners at Riker’s Island as they await Sandy. It understands disaster as a collective system, the state as precarious, and community as necessary.

But that isn't totally getting at what is so great about this poem, isn't getting at why we wanted to publish it.

This book is impossible to excerpt too. It builds so quietly and yet so luminously that it is hard to pull out a part of it in isolation. But here is an excerpt from the letter "s":

so what about the instinct to survive.

so what about birds and burying beetles.

so what about ants and bees and termites.

so what about the field upon which tender feelings develop even amidst otherwise most cruel animals.

so what about migration. breeding. autumn.

so what about the numberless lakes of the russian and siberian steppes and what about aquatic birds, all living in perfect peace—


Born in Manapla, Philippines, Cheena Marie Lo is a genderqueer poet based in Oakland, CA. They co-curated the Manifest Reading Series, which featured mainly queer experimental artists and writers. They currently coordinate a youth art program at California College of the Arts, and co-edit the literary journal, HOLD. 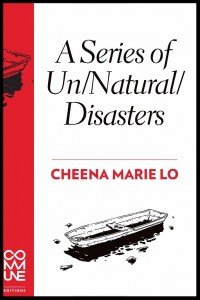