How to Go Mad without Losing Your Mind: Madness and Black Radical Creativity

“Hold tight. The way to go mad without losing your mind is sometimes unruly.” So begins La Marr Jurelle Bruce's urgent provocation and poignant meditation on madness in black radical art. Bruce theorizes four overlapping meanings of madness: the lived experience of an unruly mind, the psychiatric category of serious mental illness, the emotional state also known as “rage,” and any drastic deviation from psychosocial norms. With care and verve, he explores the mad in the literature of Amiri Baraka, Gayl Jones, and Ntozake Shange; in the jazz repertoires of Buddy Bolden, Sun Ra, and Charles Mingus; in the comedic performances of Richard Pryor and Dave Chappelle; in the protest music of Nina Simone, Lauryn Hill, and Kendrick Lamar, and beyond. These artists activate madness as content, form, aesthetic, strategy, philosophy, and energy in an enduring black radical tradition. Joining this tradition, Bruce mobilizes a set of interpretive practices, affective dispositions, political principles, and existential orientations that he calls “mad methodology.” Ultimately, How to Go Mad without Losing Your Mind is both a study and an act of critical, ethical, radical madness.

“This lyrical and profound tour de force explores the intersection of race and derailment, or ‘madness as methodology.’ We know that the traumatic discordance of slavery's enduring legacy manifests as both private sorrow and public health emergency. Yet that unyielding stress is sometimes also the forge of a radical black creativity vividly exceeding the shapeshifting states of un-Reason into which raced and nonnormative bodies are too relentlessly imagined and compressed. La Marr Jurelle Bruce has given a gift in this powerful recontextualization of black creative ‘madness’ as liberatory demand for expressive life—to wit, an aesthetic practice by which, ultimately, ‘what is stolen is returned, and what is unwritten is at last inscribed.’” — Patricia J. Williams, columnist for "Diary of a Mad Law Professor" in The Nation 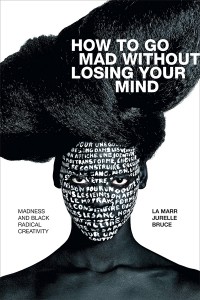