A Map of Misreading

In print for twenty-seven years, A Map of Misreading serves as a companion volume to Bloom's other seminal work, The Anxiety of Influence. In this finely crafted text, Bloom offers instruction in how to read a poem, using his theory that patterns of imagery in poems represent both a response to and a defense against the influence of precursor poems. Influence, as Bloom conceives it, means that there are no texts, but only relationships betweentexts. Bloom discusses British and American poets including Milton, Wordsworth, Shelley, Keats, Tennyson, Browning, Whitman, Dickinson, Stevens, Warren, Ammons and Ashbery. A full-scale reading of one poem, Browning's "Childe Roland to the Dark Tower Came," represents this struggle between one poet and his precursors, thepoem serving as a map for readers through the many versions of influence from Milton to modern poets. For the first time, in a new preface, Bloom will consider the map of misreading drawn by contemporary poets such as Ann Carson and Henri Cole. Bloom's new exploration of contemporary poetry over the last twenty years will illuminate how modern texts relate to previous texts, and contribute to the literary legacy of their predecessors. 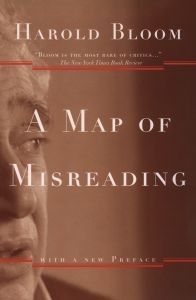 Mei-Mei Berssenbrugge
A Treatise on Stars

Harold Bloom
Shakespeare: The Invention of the Human