As the rope was tightening around my neck, an Alien made love to me. Belief is a technology for softening the landscape. The world becomes more beautiful when God is in it. Here is what happens inside a person's body when they starve.

Written in the shadow of Georg Buchner's Lenz at razor pitch, Aliens & Anorexia, first published in 2000, defines a female form of chance that is both emotional and radical. The book unfolds like a set of Chinese boxes, using stories and polemics to travel through a maze that spirals back into itself. Its characters include Simone Weil, the first radical philosopher of sadness, the artist Paul Thek, Kraus herself, and "Africa," her virtual S&M partner who's shooting a big-budget Hollywood film in Namibia while Kraus holes up in the Northwest Woods for the winter to chronicle the failure of Gravity & Grace, her own low-budget independent film.

In Aliens & Anorexia, Kraus argues for empathy as the ultimate perceptive tool, and reclaims anorexia from the psychoanalytic girl-ghetto of poor "self-esteem." Anorexia, Kraus writes, could be an attempt to leave the body altogether: a rejection of the cynicism this culture hands us through its food.

Chris Kraus is a filmmaker and the author of I Love Dick and Aliens & Anorexia, and coeditor of Hatred of Capitalism: A Semiotext(e) Reader. Index called her "one of the most subversive voices in American fiction." Her work has been praised for its damning intelligence, vulnerability and dazzling speed. 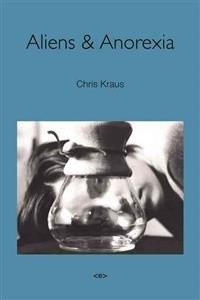 Barbara Barg
The Origin of the Species

Eileen Myles
Not Me