At once practical handbook and philosophical inquiry, Ida Börjel’s exploration of sabotage and its history throws a wrench into the machinery of contemporary language, generating strange affinities between wreckers, iconoclasts, and saboteurs of all types. Sourced from political pamphlets and factory workers’ diaries, and drawing out important connections between technology and poetic technique, Börjel’s poem allows for the most profound understanding of sabotage – technological, political, economic, and linguistic all at once. Silencing the machines, these sabotaged manuals allow us to hear new sounds and new possibilities for resistance.

"One of the most important poets in Scandinavia." — Kamilla Löfström, Information

"The instructions [in The Sabotage Manuals] are restrained, instrumental, seemingly naive (”so simple   to place something in one/spot instead of another”) but then there is this implied “human factor,” where the individual is actually required to commit a deliberate error. Particularly remarkable is the psychological range of the destructive activities, for instance the relation between setting something on fire vs. acting like an idiot. . . In the series “silences, gaps in the factory matrix,” the factory matrix is communication itself and another form of sabotage is proposed – silence." — Mira Langeland, from the preface to the original Swedish edition

Ida Börjel was born in 1975 in Lund, Sweden. She is recognized as one of the most important Swedish poets of the last decade and has received numerous prizes for her works, which include Sond, Skåneradio, Konsumentköplagen: juris lyrik , and MA. Her poems have been translated into fifteen different languages. She currently lives in Röstånga and works with the City Fables Group at Malmö University, exploring the way that stories about financial success circulate in contemporary cities.

Jennifer Hayashida is a writer, translator, and visual artist. Her most recent projects include translation from the Swedish of Athena Farrokhzad’s White Blight (Argos Books, 2015) and Karl Larsson's Form/Force (Black Square Editions, 2015). She is director of the Asian American Studies Program at Hunter College, CUNY, and serves on the board of the Asian American Writers’ Workshop. 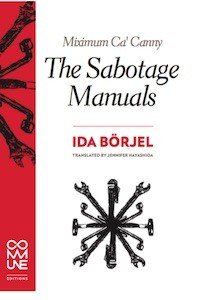