Norma Jeane Baker of Troy is a meditation on the destabilizing and destructive power of beauty, drawing together Helen of Troy and Marilyn Monroe, twin avatars of female fascination separated by millennia but united in mythopoeic force. Norma Jeane Baker was staged in the spring of 2019 at The Shed’s Griffin Theater in New York, starring actor Ben Whishaw and soprano Renée Fleming and directed by Katie Mitchell.

For two decades her work has moved–phrase by phrase, line by line, project by improbable project–in directions that a human brain would never naturally move.

This little grenade of a book is difficult to categorize. It’s a performance piece and a treatise on war and beauty, reality and fakery, bombshell and bombing—with ancient Greek etymology lessons woven in to show us how the small and everyday becomes epic, and vice versa. Marilyn Monroe (neé Norma Jeane Baker) is fused here with Helen of Troy, and elements of both milieus—Homer and Hollywood—populate the narrative. It’s easy to imagine the blunt beauty of Carson’s language being spoken and sung on stage.

Carson at her best: arresting, exact, at once surprising and unsurprised. She depends on Euripides throughout, but pushes him further than he was prepared to go.

This book fuses poetry, fun Greek history lexicon lessons, Helen, and Marilyn. ‘War creates two categories of persons: those who outlive it and those who don’t.//Both carry wounds.’ Delicious couplets. There are dancers who have internalized the music to such a high vibration that they no longer fit into a strict categorization for what they do. They weave with the music in an ancient alien way. Anne Carson brings intergalactic musical moves to the written page. ‘Hermione it’s me, hello hello hello hello hello.’ I dare you to get to that line and not ache. How does an artist write this way? Brilliance and cherries light her stage.

She reaches past the contemporary moment to craft her unique and universal voice, one that is both as ancient as Sappho and intimidatingly modern.

There is a stark awareness nowadays that we need new ways of thinking about female icons like Helen or Marilyn Monroe, new ways to revolve the traditional male version of such events 360 degrees and find different, deeper sorrows there.

She is one of the few writers writing in English that I would read anything she wrote. 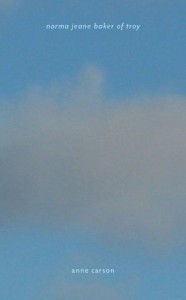 Anne Carson
Economy of the Unlost