With the global rise of a politics of shock driven by authoritarian regimes that subvert the rule of law and civil liberties, what paths to resistance, sanctuary, and change can cultural institutions offer? What about activism in curatorial practice? In this book, more than twenty leading curators and thinkers about contemporary art present powerful case studies, historical analyses, and theoretical perspectives that address the dynamics of activism, protest, and advocacy. What unfolds in these pages is a vast range of ideas—a tool kit for cultural producers everywhere to engage audiences and face the fierce political challenges of today and tomorrow.

What about Activism? is based on the summit “Curatorial Activism and the Politics of Shock” at the School of Visual Arts, New York. Along with expanded versions of the talks given at the conference, the book includes a transcript of a roundtable discussion moderated by Steven Henry Madoff and Brian Kuan Wood among the speakers and students in the MA Curatorial Practice program at SVA. 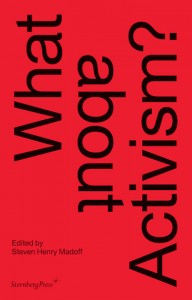