Edited and translated by Rosa Alcalá, Spit Temple gives transcripts or notes for nine “oral performances” that took place between 1995 and 2002, alongside the editor’s critical introduction, an autobiographical memoir by Vicuña, and a gathering of reports, responses, and reflections by poets and scholars, that also offers a map of how her work has come into a (primarily North American) English language context, part of the 1970s ethnopoetic explorations of Denis Tedlock and Jerome Rothenberg, and, more recently, an engaged, experimental poetics of Nada Gordon, Juliana Spahr, Edwin Torres, and Rodrigo Toscano, amongst others.

Made from video and audio recordings, the contexts vary from galleries, to bookstores, to various university lecture halls, from short sets in events framed as poetry readings, to longer gigs announced as performance-lectures. The transcripts pay attention to environmental factors, noting, too, the inaudibilities and failures of reproduction, less as unfortunate error than as the inevitable ground of translation and mediation through which Vicuña’s work comes to us, and with which it is itself consciously entwined.

The transcripts also offer scenographic details, most usually about the beginning of a performance, so that, for example, a 1995 performance at The Poetry Project at St. Mark’s Church in New York City is described as commencing when:

A woman introducing Vicuña walks away from the podium. The camera’s gaze is directed towards an empty podium and microphone. Silence. Then, chant-like sounds somewhere in the distance, out of frame. Frame opens and Vicuña approaches, singing, her hands folded behind her back, clutching a manila envelope. She sings.

If the work in Spit Temple has taken a decade to find book form, it does so at an apt moment. The book’s publishers, Ugly Duckling Presse, have a book series on experimental performance scripts (Spit Temple, however, is part of their eclectic and indispensable DOSSIER series, edited by Anna Moschovakis) and also produce INDEX, an open submission performance annual. In the UK, John Lely and James Saunders’ recent compendium Word Events: Perspectives on Verbal Notation, although more focused on musical traditions than Vicuña’s work, gives critical and historical frameworks to what until recently has been a little commented upon arena of endeavor. 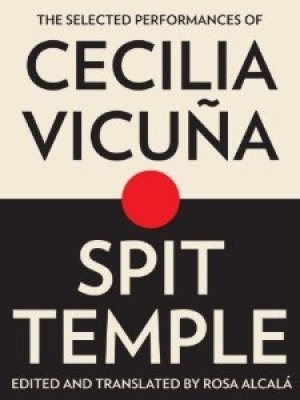 Jena Osman
Twelve Parts of Her