This special issue, edited by Anu Koivunen, Katariina Kyrölä and Ingrid Ryberg, explores queer world-making, utopian visions, and tensions between sexual and national belonging in Nordic and Baltic cinema cultures. Film culture has been key in building the image of Nordic LGBTQ friendliness, and “diversity” has become a catch phrase for various national film institutes, while queer film scholarship has long recognized the problems with politics of visibility. Going beyond the language of diversity, the featured articles and essays in this issue discuss recently produced queer, trans and non-binary films across the region, addressing aesthetics and politics of representation as well as contexts of production. Underlining the high stakes in the cinematic imagining of alternative queer and trans worlds, contributors ask: who and what are the subjects that can inhabit and become legible within national, regional, sexual, gendered and racialized categories? Contents:

[i]lambda nordica[/i] is a peer-reviewed open-access academic journal of LGBTQ studies. The oldest of its kind in the Nordic region, the journal is dedicated to interdisciplinary research in lesbian/gay/bi/trans* and queer studies. lambda nordica is a regionally based journal that takes inspiration from international sibling journals such as [i]GLQ[/i], [i]Sexualities[/i], [i]Journal of Homosexuality[/i] and [i]Journal of Lesbian Studies[/i], and aims to foster international collaboration and dialogue, and to offer junior as well as senior researchers an opportunity to publish in both English and Scandinavian languages. The journal also reviews Nordic and international literature in the field of LGBTQ studies.  lambda nordica was founded in 1989 as a Swedish/Nordic cultural journal dedicated to homosexuality research and aimed at a broader audience, in close collaboration with the LBT movements at the time. For the past 10 years, however, lambda nordica has been an academic journal aimed at researchers, teachers and students, and we have been online and open access since 2012. 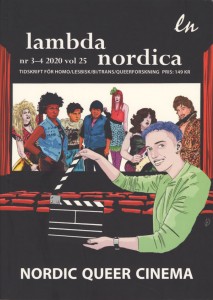