The Punishments of Hell

The first prose work by Robert Desnos initially appears to be a roman à clef, except that would imply the sort of conventional narrative that is here cast gleefully aside. Most of Desnos’s friends in the Paris Dada movement make an appearance, André Breton, Louis Aragon and Benjamin Péret among others; yet these young men, so well known now but who then had barely made their mark, find themselves consigned to a “cemetery” just before the end of the book, interred alongside their literary heroes. The past, it seems, must be buried, perhaps the future too.

The Punishments of Hell, or New Hebrides lies between Dada and Surrealism, looking back to nihilistic incomprehensibility of, say, Tristan Tzara and overwhelming it with the savage lyricism for which Desnos would become renowned. The protagonists are swept up into violent journeys by train and steamship across Paris and beyond, as fabulous events consume their everyday lives and oracular voices spout verses that may be nonsense or wisdom. All is confusion at this critical pass when the future seemed simultaneously at stake and almost within reach — a very modern sense of chaos is embodied in this vivid and breathless “novel". 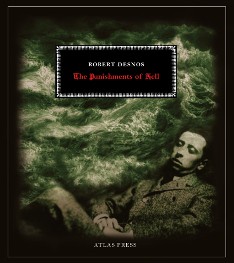